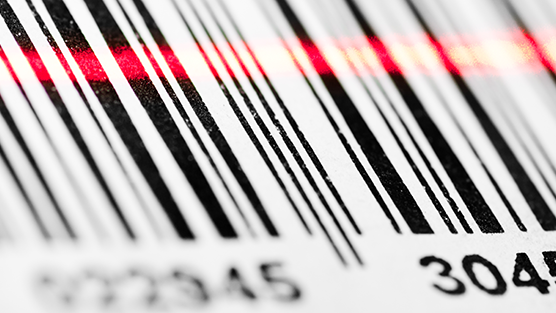 You think you know, but really, do you?

This is the first in series of articles about Barcodes, how they work, innovative ways they are being used and what is next.

In 1948, Bernard Silver and Norman Joseph Woodland started research into creating a cash register that could read a product’s label and automatically enter in the correct price. The goal being to speed up and reduce errors during the check out process.

Their first challenge was how to make a product’s label “readable” for a machine.

To solve this, they used technology that was readily available to them in the 1940’s. That being the telegraph.

Before we could transmit our voice through radio waves, we transmitted tapping sounds over wires. The tapping was Morse Code and the machine that made the tapping sound was the Telegraph.

These taps would be visually represented as dots and dashes. So our S.O.S would look like this:

Woodland’s brilliant idea was to turn Morse Code’s dots and dashing into lines which could then be “read” by a machine.

Using sand on the beach in front of his father’s Florida home, “I just extended the dots and dashes downwards and made narrow lines and wide lines out of them”, said Woodland (Seideman, Tony, “Barcodes Sweep the World”, Wonders of Modern Technology)

Meaning our Morse Code S.O.S. would now look like this:

But there was a problem.

Woodland and Silver realized that their new code would always have to be scanned straight on to ensure the scanner would read their code from left to right.

Meaning, if the code said “coke” and you scanned it upside down, then it would be read as “ekoc”.

Their solution was to create the Circular Barcode, which could be scanned from any angle.

Their Circular Barcodes was the Great Grandparent of the QA Barcode.

Now that Woodland and Silver had their barcode, they needed a way for a cash register to read it. So again, they turned to popular technology that was widely in used in the 40’s. That technology being movies.

When movies first came into being, they were silent. The challenge was how to add sound. The solution was to add the sound directly onto the edge of the film strip as an image of a sound wave.

When the projector shone light through the film onto the movie screen, it also illuminated the images of the sound waves. On the opposite side of the film strip edge was a Photomultiplier.

A Photomultiplier takes light particles, which are known as photons, and turns them into electrons.

As the photons projected through the images of the sound waves changed, then so did the electron flow produced by the Photomultiplier. This changing electron flow created an electric signal. The electric signal was then converted to sounds via an amplifier and a speaker system.

So when Woodland and Silver needed a way for a machine to read their barcodes, they simply adapted the movie sound technology. They did this by shinning a 500-watt light bulb through the barcode and onto a Photomultiplier. But instead of turning the created electronic signal into sound, they converted the signal back into the original letters and numbers of the barcode.

Now that we have a barcode and scanner, we need to put it together so that our cash register would charge the right price.

Imagine if we had a bottle of Coke. We then created a barcode using our converted Morse Code to spelled out the word, “Coke”. We then fastened our barcode onto our bottle.

We then connected our scanner to a computer and scanned our barcode.

The scanner reads the barcode and tells the computer, “Coke”.

The computer then looks up in its’ database the word “Coke”, finds a record that says a Coke costs $1.25 and then display’s on its monitor “Coke $1.25”.

And that’s the magic of barcoding.

But wait! we are not done yet.

We don’t use Morse Code for barcodes and the linear barcode became the standard.  But why?

In 1949 Woodland and Silver filed a patent for their barcode and scanner, which was granted in 1952. They then quickly sold their patent which ended up in the hands of RCA.

While they were waiting for their patent’s approval, and this is important, Woodland started working at IBM.

In 1966, RCA attended a meeting held by the National Association of Food Chains (NAFC) on how to create an automated check out system. The meeting resulted in an agreement to initiate an internal project to test Woodland and Silver’s barcode patent.

In July 1972, RCA and the Kroger Store in Cincinnati started an 18-month test of the Woodland and Silver’s circular barcode. Sadly, their test kept failing because when the printers created the circular barcode, the ink would smear which then made the barcodes unscannable.

Back at IBM, Woodland was still working on his original linear barcode. He discovered that linear barcodes wouldn’t smear because they were printed in the same direction as the stripes.

But there was still the issue that linear barcodes could only be scanned from one direction.

With the barcode always starting with a 0 and ending with a check digit, the scanner and computer always knew, regardless at what angle it was being scanned, which way to read the barcode.

Woodlands Linear Barcode combined with Laure’s format became IBM’s UPC (Universal Product Code) which on the April 3, 1973 was selected to be the NAFC standard.

IBM’s UPC is still widely used today as the standard for the retail industry. However, there are now countless number of other barcode formats in use today, such as EAN, Industrial, Interleaved, Standard, PostNet, Code 11, Codabar and QR Barcodes.

So now you know how barcodes work.